Taxation of winnings disintegrates the legal market of games of chance

Taxation of winnings disintegrates the legal market of games of chance →

Tatjana Šćepanović, Secretary General of Montenegro Bet, the Association of Providers of Games of Chance, pointed out at the European Legal Conference held in Belgrade and organised by the European Organisation for Gaming Law that the devastating consequences of the taxation on winnings in Montenegro emerged vary soon after their introduction. 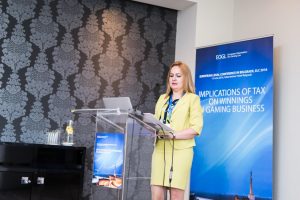 She emphasised that this tax was directly aimed against the operators who deal in sports betting which reflected in the constant changes of the law and the regulations. Within six months from the moment of introduction of the taxation of winnings there were several changes of the Rulebook, which is in opposition to the Law itself and the Constitution of Montenegro. The application was possible only on sports betting, which was confirmed by the minutes and conclusions of the Tax Administration although the law requires the application on all kinds of games of chance. This lead to massive migration of the players to illegal operators and foreign websites with no such taxation, from which Montenegro could not collect taxes. In this way, domestic legal operators could not be competitive and foreign operators were not present on the market.

She also remarked that by introduction of this tax the state authorities directly affected the functioning of free competition amongst business entities, which is in opposition to the EU rules and directives and the Constitution of Montenegro.

The association of Montenegro Bet submitted over 1,000 suggestions, proposals and letters to the state authorities and collected more than 21,000 signatures of adult citizens of Montenegro who expressed their will against taxation of their winnings.

After viewing all devastating effects of this taxation, the Director of the Games of Chance Administration said that this taxation has discriminatory effects and that it was no longer possible to apply such taxation. In the explanation upon the abolition of this taxation in the Montenegrin Parliament, it was also pointed out by its members that the introduction of this taxation resulted in a negligible amount of revenues.

On the basis of all these arguments, it is necessary that the state authorities in Serbia and Bosnia and Herzegovina should predict the catastrophic effects of this tax and together with the operators find the solution for a fair taxation system in the gaming business activity.

Otherwise, it will result in closure of the legal sports betting industry and loss of substantial budgetary revenues of Serbia and Bosnia and Herzegovina with many people losing their jobs.